SAI BABA: WHAT IS SPIRITUAL SELF-REALIZATION

Sai Baba: What is Spiritual Self-Realization
The essence of Sathya Sai Baba's worldview lies in self-realization, the exploration of a person's very rich inner world. It is obvious that the deep feeling of "I" live is inherent in all. The very existence does not require proof, it is characteristic of a person of any nationality and age, gender, national culture, social status, education and religion.
People can be happy or heartbroken, forget to find a definition for their mysterious “I”, experience happiness or suffering. They cannot give an explanation of who reflects, speaks, performs certain actions, or who is aware of the world around him. 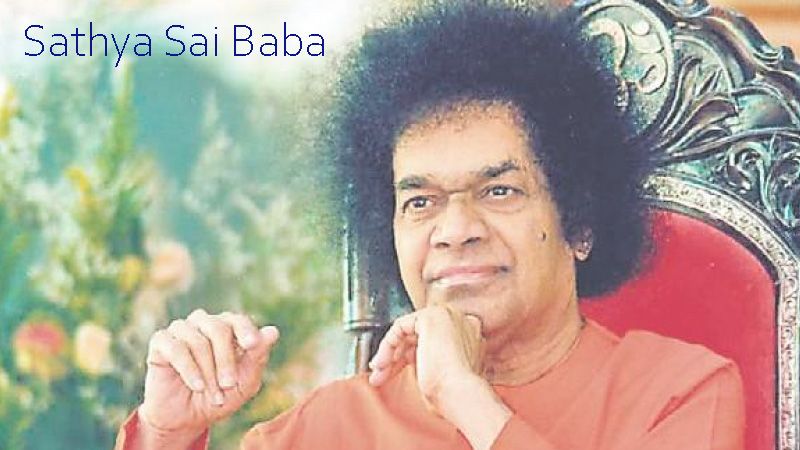 Any question is preceded by the main one - who is "I". A person concentrates his attention on the goal that he wants to achieve, often forgetting to figure out who the real “I” is. Sathya Sai Baba introduced the skills of meditation, self-realization of a person in his activities by telling amazing and instructive stories that are described by the old Vedic ritual scriptures. But the main issue should remain the deep analysis of human nature, understanding the unity of his inner worldview and God, which is self-realization.

Sathya Sai Baba on Finding the Meaning of Life

India is a country famous for its spiritual teachers, sorcerers, yogis, gurus and supernatural powers. Sathya Sai Baba was a rather famous, but also a mysterious Indian guru of the 20th century. It is very difficult to answer the question - who Sathya Sai Baba is. People often endow him with qualities and characteristics that they want to notice.

Sai Baba said many times: "I am a mirror reflecting your inner world." Some noticed God in him, others an inventive magician. This is a difficult problem, everyone should intuitively answer who Sai Baba is for him. To do this, you need to understand the depth of your worldview and get self-realization.

It is not very important for me to know who Sai Baba is, more important is what he teaches me. There is a popular opinion of the philosopher, described in his books, where he writes: “Yes, I am God, you are all Gods too. The difference between us is that you forgot about it, but I did not. Any person is God, with the only difference in the degree of awareness of his true spiritual nature. " This judgment of Sai Baba gives an exhaustive answer to the question of his perception of himself and other people.

According to an old Japanese proverb about self-realization and its methods, "Buddha is not a rice cake drawn in a picture, he is like a real cake that can satisfy hunger." This interpretation fits perfectly with Sai Baba's view. It is worth studying his life in detail, its huge message, intended for everyone to be able to change their being.

His life is a great example of the expression of the endless creative potentials that are in the hearts of people. God is the union of individual souls, in God they are all inseparable. Sathya Sai Baba splendidly embodied in his life the truth that everyone had great opportunities for divine creativity.

The Goal of Self-Realization

For every inhabitant of the planet, the true "I" is God. Enlightenment is the destruction of the self-identification of one's individual "I" and the illumination of the real absolute "I". It's like a small cloud dissolving into an endless sky.
According to Yogi Ramayah, the natural state of the physical body is eternal youth. His soul resembles a drop dissolving in the ocean of Divine Consciousness at the moment of self-realization, and his physical body is eternal energy.

A person who is attached to his body cannot become physically immortal. He who expects to be physically immortal for the delight of his flesh will never achieve this. Those who were able to realize the absolute "I" passed through an amazing process in which divine energy descended from the lofty spheres, purifying all plans of human life, transforming people into God-men, becoming the freedom of their self-realization.

Only the highest yogis, who have completely freed themselves from attachment to their body and have realized the absolute "I", acquire self-realization and immortality of the body. Those who realize the true "I", in a natural way transform the matter of their body into golden energy and take the path of great service to any living being.

The Path of Self-Realization

Sai Baba once strictly asked me during a conversation: "What are you doing?" Hearing this question, I assumed that the fortuneteller was interested in significant things, the essence of my existence. I took a breath and replied: "I'm doing yoga." After a short pause, I got the feeling that the problem was about self-realization. With a slight smile, in a calm but rather strict voice, the philosopher said: “You shouldn't tell me about your yoga practice. You have absolutely no idea what it is! Yoga is a path without end! You can't answer me like that. "

An energetically powerful question penetrated deeply into my worldview. I asked myself two questions: “What am I doing in this life? What is the main purpose?” After this meeting, I had to return to Moscow. Six months later I returned to Puttaparthi. Baba called me to him. Turning in my direction, he sternly directed his gaze into my eyes. I don't know why, but I got the feeling that the same question will be asked again. I was instantly seized with horror that I could not determine the meaning of my life, even after six months.

Smiling, the fortuneteller in a meek and beautiful voice asked me rather quietly: "What are you doing?" I immediately realized that over the past time I could not advance even a millimeter to understand what had changed in my life. I realized with horror that a pause due to a long silence brings me closer to fainting.

Gathering my strength, I quietly whispered: "I cannot know ... I cannot know why I live, what I create." In Sai Baba's gaze directed at me, I felt the infinity that shone in his deepest eyes. Two months later I was in Moscow, and then I visited Puttaparthi again. Suddenly I imagined that Sathya Sai Baba would ask me the same question again during the conversation. I got the feeling of a student who was not ready for the exam.

Many dreamed of being interviewed, but it was funny for me to admit to myself that I would refuse it with great satisfaction. I even deliberately ignored the morning program visits, hoping that Sai only wanted to communicate with my group and I could skip the meeting. However, Sai Baba called me with a small group. After a few minutes of waiting, we were invited to a small room. The premonition of the denouement made me very worried. Turning to me, the philosopher, as if not seeing the tension in my body, asked a familiar simple question: "What are you doing?"

I did not prepare a preliminary answer and instinctively said: "I paint pictures, I am an artist by vocation." With a smile, Sai Baba said, "You answered correctly." My soul began to fill with a pleasant feeling of completeness. The creative energy of God is expressed in all human affairs. You can do art, science, professional sports, studying, finance; politics.

God is the Creator, people begin to reveal their spiritual potentials and gain self-realization through creativity. The spiritual path combines fasting, prayer, life in the Himalayas, and the study of philosophy. It includes the entirety of human life. Conversations with the philosopher helped me to understand that the religious path, the search for oneself - all this happens to me, my thoughts, the expressions used and the actions performed.

Sometimes, during an individual conversation with me, Sai Baba asked: “What do you want? Determine what your goal is!" The question contained great spiritual appeal and food for thought. A similar question immersed people in long-term contemplation. A pleasant voice which asked the question, an exhaustive full answer, defining incidents from life in the future, opening up new opportunities, remained in the memory for a long time.

Sathya Sai Baba was a fortuneteller, so many sought to find out his answers to the questions of life that interested them, wanting to receive his advice on what to do and what to do in different life situations. However, Sai Baba never gave a person ready-made answers about what should be done in a particular case.

We adapt and shift the solution of our life problems onto other people. Sathya Sai Baba gave everyone free choice, he inspired them to make their own decisions. Any individual is obliged to determine his aspirations and purpose in life.

Self-Realization in the Tradition of Sai Baba

Swami constantly communicated with followers personally, taking into account their needs and the degree of awareness of their spiritual path. Once he was asked in what language to practice prayers and mantras? Sai recommended it in Sanskrit. In his opinion, Sanskrit was a great language used to write the Vedas. It has a vibration that clears the worldview of people and the space around them. Sai Baba claimed that different nations and religions were capable of reciting Sanskrit mantras in order to gain self-realization.

I have experienced the greatness of Sanskrit and the power of mantras many times in my destiny. Once I got to a meeting with a group in which the question arose about the usefulness of the practice of mantras. Suddenly Baba cheerfully and fervently said that he did not like Sanskrit and those who chanted mantras. This contributed to the development of pride in a person. Those chanting mantras were mistaken in the assumption that they would draw closer to God.

Just seven days ago, he said something completely different! Why? Sai said that in the culture of any nationality there were prayers in their native language. The last interview was attended by groups of people of many nationalities and faiths: Russians and Americans, Ukrainians and Tatars, Indians. Sai recommended to all those present to forget about Sanskrit, and speak with God only in their native language.

I had a unique opportunity to communicate enough with the predictor, to make observations and comparisons, to discuss any question about self-realization. His words were contradictory, but always consistent with the needs of the people who were with him at that moment.

At one of the meetings, Baba made the exact opposite of the previously said statement. My first reflex was a huge daze, turning into shock, but I understood the whole point of his approach, which was about individuality for each person.

Baba met so many people. Thousands, maybe millions, who wanted advice, visited him. One of the greatest phenomena of Sai Baba was the unique ability to have an individual special approach to all people who communicated with him, regardless of their number. This allowed all his wishes and advice to acquire a deep subjective character.

It is very important to understand that what can be beneficial for one person, for another it may be categorically unacceptable. It is difficult enough to quote Sai Baba due to the fact that he expressed his thoughts, addressing the specific needs of people, taking into account their level of consciousness.