Sai Baba funeral, strange topic for an article. How can God be born or die? God is not born, God is immortal, but the Avatar incarnated on Earth has a physical body that lives according to physical laws, hence it gets old and sick and eventually dies. The body leaves, but Sai Consciousness is immortal.
Sathya Sai Baba was born on November 23, 1926 in the south of India. His birth name is Satyanarayana Raju. He left this world on April 24, 2011.
SAI BABA FUNERAL
Author: Svetlana Dubyanskaya
Many people humbly refer to him as an Indian guru, philosopher and philanthropist. His followers and devotees call him God, born on Earth with a special mission. At the age of about fourteen, he proclaimed that he was the embodiment of a famous guru named Shirdi Sai Baba. Little Sathya Sai Baba left the parental home to start fulfilling his mission, serving people and society, giving instructions on spiritual practices and healing the sick.

Sathya Sai Baba performed numerous miracles, which S.Dubyanskiy personally witnessed. He possessed the power and ability to materialize sacred ash, which could heal from many diseases and ailments. He also materialized amulets such as gold rings, necklaces with amulets and even watches.

Sathya Sai Baba left this world on the morning of Easter Sunday in 2011. That year the bright Holiday of Easter was celebrated on the same day by Orthodox Christians and Catholics, as well as Jews. Usually this holiday is celebrated on different dates by different denominations. We can say that Sathya Sai Baba once again proclaimed the unity of all religions by his departure on this special day.

The International Organization of Sathya Sai Baba was founded by him for the sake of enabling people to engage in service to society, raising children, and studying spiritual teachings. At the time of his death, the Organization had about 1,500 centers in 130 countries on all continents. With the help of his Organization, Sathya Sai Baba was able to create a network of charitable projects, free hospitals and clinics with modern medical technologies. His project of supplying drinking water to several regions in southern India is the most famous. Sathya Sai Baba founded several large universities, where he gathered the best professors in India.

In 2003 Sathya Sai Baba fell down and suffered a severe hip fracture. He continued his activities after that, although at the same time he was being treated in the hospital. After 2006, Sai Baba sometimes moved in a wheelchair, gradually he began to appear less in public, and his communication with devotees and visitors to the ashram decreased significantly.

On March 28, 2011 Sathya Sai Baba was urgently admitted to a specialized hospital due to the deterioration of his condition. After a month of hospitalization, he left his body at the age of 84 on April 24, it happened at 7:40am. Sathya Sai Baba left his body consciously, that is why, when he left the ashram for the last time, he said goodbye to everyone present, this touching video recording was preserved. Of course, at that moment no one suspected that this goodbye would be the last.

Sai Baba predicted that he would die at the age of 96, but several years before he left, he said that his mission in this incarnation had already been completed and he would leave this world earlier, which he did.

After his death some Indian devotees and followers suggested that when speaking of leaving the world at 96, Sathya Sai Baba had in mind the lunar calendar and not the solar years, which are accepted by the chronology of Western people. Such assumptions are quite possible, although they are more like an attempt to find an excuse for an apparent contradiction. In fact, there is no contradiction. Yes, for many years Sathya Sai Baba predicted that he would live up to 96 years, but later he changed his prediction, stating that he would leave much earlier.

After the death of Sathya Sai Baba, a group of followers appeared, who began to claim that he would soon be resurrected and would return to the ashram in his former body. I will not condemn these people, although I consider these assumptions to be a manifestation of attachment, which Sathya Sai Baba always warned against.

According to the Vedic tradition, great gurus are not cremated, but buried, although history has had its exceptions. Sathya Sai Baba was buried in the center of his ashram, this place became his tomb, holy relics. In order for the disciples to receive blessings, they preserve the relics of the great gurus, they do not cremate, as is the case with ordinary people.

Sai Baba and India are deeply connected. He reincarnates consciously: in the 19th century he incarnated as Shirdi Sai Baba (1838 - 1918), in the 20th century as Sathya Sai Baba (1926 - 2011). Sathya Sai Baba predicted that after he leaves his body a year later he would be reincarnated as Prema Sai, which happened on June 28, 2012. You can read more about his incarnation as Prema Sai in the materials on this website.

Sai Baba Ashram continues to be a great center for spiritual development, which attracts followers from all over the world. Sai Baba Gayatri, a powerful mantra that purifies the mind and opens the heart of people, is constantly chanted on his tomb.
I also recommend reading articles about the life and spiritual mission of Sai Baba on this website and in S.Dubyanskiy’s books.

Sai Baba books on the topic of his teachings and amazing life you can read in the books published by Svyatoslav
You can also listen to the mantras dedicated to Sathya Sai Baba and Prema Sai Baba on this website. 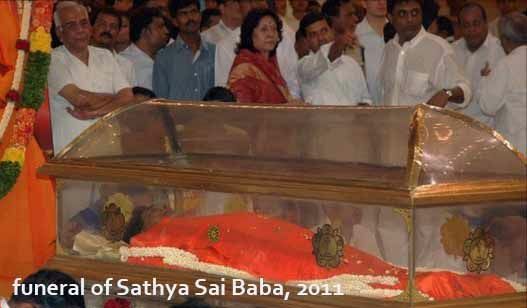